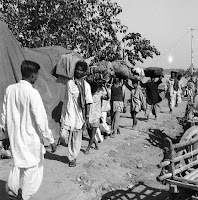 Just a thought came to my mind while me & some colleagues were discussing about voting done by Indian people who have migrated to different states within India.

How many are these in number & what is the likely effect in case they vote or not.

I decided to look for some figures on how many people migrate within India....and the number according to Census for 1991-2001 was 98.3 million (with growth of about 22% in a decade) which if we calculate according to 2009 will roughly be 10% of population.

Now, Let's presume 10% of these 98.3 million people are eligible to vote, have voter Id cards but are not able to do so due to:

1. Recently migrated (a person can only register again as a new voter from a new place incase he/she has stayed at new address for 6 months).

2. Do not have address proof of new place

But can there be possibility whereby I can vote irrespective of the place where I am in India even for limited period. Of course that calls huge amount of administrative problems in keeping a Track of people but if we are aiming for One billion votes I guess we have to look for this section of migrates.

Note: The above calculations are my own assumption and requires verification from credible sources.

Posted by FreeSpirit at 6:01 PM

Hi everybody
TED is organising a conference in India in November this year.
The conference will be held at Mysore.  The event will bring together TED regulars linking up with innovators and influencers from India, China and elsewhere in Asia. There will be 8 full sessions based on the famous TED format, plus pre and post-conference activities, evening galas and numerous other delights. The conference fees is $2400.
Check http://conferences.ted.com/TEDIndia/
Thanks to Amit & Anand for communicating about the conference.
Neeraj
Posted by FreeSpirit at 10:38 AM

http://ideas-innovation.blogspot.com/
Hi all
20 years ago, Tim Berners-Lee invented the World Wide Web. For his next project, he's building an all web for open, linked data that could do for numbers what the Web did for words, pictures, video: unlock our data and reframe the way we use it together.
Check out this amazing video of an Idea that is worth spreading.

http://ideas-innovation.blogspot.com/
Hi Everybody
Economic Downturns often bring a great Opportunity as well as pose a threat. Great Opportunity, because in times like these one can re look at what they offer, enter new markets & maximise value proposition of their offerings.
Threat because in times like these disruptive Innovation takes place which may pose a threat to one's company, so one needs to constantly adapt to changing business conditions. Eg: Google, MTV, IPOD all were born during economic downturns.
So, how can one provide added value from its offering, adapt to changing business conditions as well as act as an Innovator.
Take the case of Starbucks.
Company has Recently entered into instant coffee category & launched Via (Instant Coffee) brand of coffee. Now instant coffee business is considered to be a wasteland for Premium coffee business. So why has Starbucks entered into this arena.
One thing can be that in times like these, people start consuming less coffee, so instead of reducing the price of current offering, it had to innovate & look for new market/consumers where it can add maximum value through current offerings & instant coffee market was exactly that.
While Introducing the Via, Howard Schultz (CEO Starbucks) said
'I think John Quelch, the Harvard Business School professor and marketing expert put it best: in a tough economy, consumers are redefining value. They are consuming less, and focusing more on seeking satisfying experiences that enhance their lives.He calls this growing segment "The Simplifiers." They want fewer material goods, and more quality-of-life experiences. At our core, we have the right stuff to appeal to these consumers, whether it's the respite from the world our stores provide or now with Starbucks VIA ready brew, quality coffee on-the-go'.
Whether the new Via is a success is yet to be seen but Starbucks is on a way to innovate having found a new market for its offerings,adapted to changing conditions, found new customers and offered non-Starbucks users an affordable entry point into the Starbucks world.
Have a look at the new Via ad and enjoy a cup of coffee.

Thanks
Neeraj
Source: Youtube.com
http://www.huffingtonpost.com/howard-schultz/staying-real-in-an-instan_b_167381.html
Posted by FreeSpirit at 5:40 AM

Email ThisBlogThis!Share to TwitterShare to FacebookShare to Pinterest
Labels: Innovation

Design thinking for the future

Check out videos from the session devoted to Design thinking for the future, from the LIFT conference posted on experientia blog.
http://www.experientia.com/blog/design-thinking-for-the-future-at-lift09/
Thanks
Neeraj
Source: http://www.experientia.com/blog/design-thinking-for-the-future-at-lift09/
Posted by FreeSpirit at 1:03 AM

ideas-innovation.blogspot.com
Hi all
Tom Kelley (GM of Ideo) recently addressed students of Stanford and listed essential attributes which one should have, inorder to be innovative & creative. This is Innovation made personal. Have a look at the following 9 part video series (3-5 min each).

Hi all
TED has uploaded some more videos from this year's conference. The latest is of Evan Willams talking about Twitter & its spectacular growth being driven by unexpected uses invented by users themselves.
Garr Reynolds has posted an article about the same. (http://www.presentationzen.com/presentationzen/2009/03/ted-talk-twitter-the-power-of-the-unexpected-.html)
Highly recommended.
Learning : User Innovation is Driving Twitter, increasing its utility to what its developers thought making it more valuable.
Check : How is your brand/Service being used by users.
Check out the Video below.
Thanks
Neeraj
Source: TED.com
Posted by FreeSpirit at 2:04 AM

Ideas-innovation.blogspot.com
Hi all
Ford Motors Co. will be introducing the new F-150 truck soon which it has made in colloaboration with Harley Davidson. This  will be the 14th Truck that both companies have designed together. (http://sg.news.yahoo.com/ap/20090210/tbs-auto-show-harley-ford-f8250da.html)
Although such kinds of collaboration is not new and companies do colloborate with each other but with the economies facing Downturn, can such strategy (collaborate & Co- Create) be  a good Idea to come up with new products & experiences and offer customers something different, integrating elements of two different brands together.
But's what are the benefits and in what way companies can Innovate by collaborating.
Benefits:
Creates Curiosity among buyers: In times like these Companies resort to cut costs be it marketing, advertising, etc. Different companies coming together, creating & offering products & services creates curiosity among buyers & If a product/service is able to create curiosity among buyers then less marketing expenses will have to be incurred.
Learning Experience: Collaborating & Innovating with companies/ customers is a great way to learn & infuse creativity into your Teams.  Different people brings in different & fresh perspectives which are extremely useful.
Creating new Value Propositions:  Collaborating together helps in redefining/ Creating new value Propositions. I guess this is the right time to have a relook at the core value proposition which your product & brand is offering & what elements should be integrated in the new collaborated product/ service
Sharing of Resources:  Resources are limited & in present times they become even more important. Colloboration & innovating with each other allow Resources & capabilities to be shared thus providing benefits to each other.
One of the company which is Innovating based on collaboration & co Creation is P&G. Apart from co- creating & innovating with customers, it is also doing so with Retailers (with Target, Wal-Mart), Suppliers & Competitors (with Clorax).
Innovation through Colloaboration & Co- Creation can be a great way to come up with new value propositions ,offer products & services & also to infuse fresh creative thinking into the organisations.
So can we expect lot more Colloaborations & Co Creation activity taking place in upcoming periods.
Coming back to Ford- Harley Davidson Partnership, Check out the upcoming F150 Truck.
Enjoy the ride